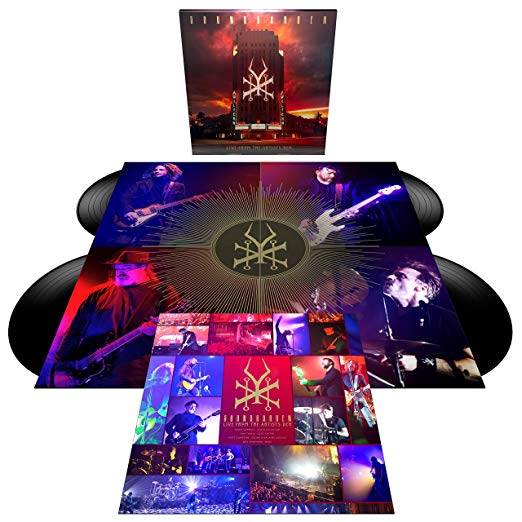 6 1/2 years following the recording, Soundgarden are releasing: Soundgarden: Live from the Artists Den.

This concert was originally recorded on February 17, 2013, at the Wiltern Theater, in Los Angeles, California, and was the final show, of the band's winter US tour, in support of their most recent album, at the time, King Animal.  Playing to a sold out crowd, the almost 2 1/2 hour show featured a career spanning 29 songs, including tracks from King Animal interspersed with classics from their previous albums, including Badmotorfinger and Superunknown.

Since the initial performance, this has become one of the most requested releases, in modern music history.  It's now available in a Super Deluxe Box and includes the full 29 track concert film, in 5.1 surround sound and stereo on Blu-ray, 30 minutes of band interviews, four 180-gram audiophile black LPs, 2 CDs, a 40-page photo book, four band lithos, and replica artist all-access pass and ticket stub from the original show.

Soundgarden: Live from the Artists Den is also available as a 4LP 180-gram audiophile black vinyl set, an individual Blu-ray, and a 2-CD collection.  It can ordered/purchased here.

Check out our Soundgarden products we have available on Rocker Rags.