Our women's vintage Jimi Hendrix v-neck concert tshirt is from the classic rock guitarist's 1967 summer tour. For these shows, Jimi was actually the opening act for The Monkees and was not well received by the Monkees' audience, as his form of rock was much heavier than the more pop oriented music of The Monkees.

Our Jimi Hendrix Live in Concert Summer 1967 Tour tee is made from 100% cotton and features washed out effects to the graphics for a true vintage look. The shirt spotlights an image of Jimi as well as 3 of the cities he performed in: New York, Los Angeles and Austin.

CLICK HERE to choose your size
Jimi Hendrix
Jimi Hendrix Vintage Distressed Fashion T-shirt by Chaser. Women's Black Shirt
$61.50
This women's distressed vintage fashion Jimi Hendrix tshirt, by Chaser, spotlights a classic image of the legendary guitarist. While his career only lasted a short time, within that time, he became... 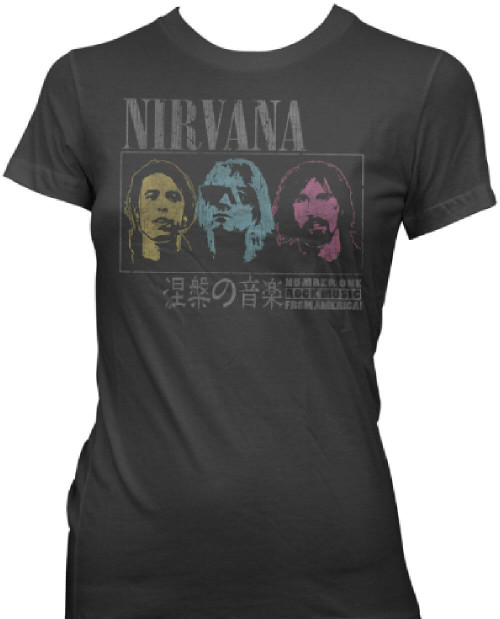 CLICK HERE to choose your size
Nirvana
Nirvana Concert T-shirt - Japan Number 1 Rock Music Band From America. Women's Black.
$22.50
This women's vintage black Nirvana concert t shirt is from the Grunge band's early 1990s tour of Japan and features a multi-colored drawing of Nirvana along with both Japanese lettering and the words...