The Man Who Fell to Earth...Through Your TV

The Man Who Fell to Earth...Through Your TV

Posted by Lando On 22nd Aug 2019 In The Man Who Fell to Earth, David Bowie, Thomas Jerome Newton, Walter Tevis 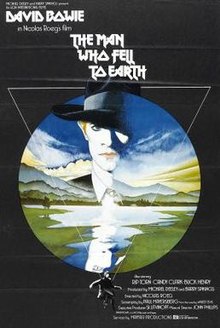 Remember The Man Who Fell to Earth?  It was a 1976 movie, based on a 1963 novel, by Walter Tevis, about an alien, pretending to be human, who crashes on Earth, in search of water to bring back home to his family, where his species are suffering a drought. More importantly, it was the first acting role, for David Bowie, who stars as the alien.

CBS All Access has confirmed a TV series, based on the novel/film, is already in production and will focus on the next chapter, of Thomas Jerome Newton's life, the protagonist, of the novel/film/tv series, originally portrayed by Bowie.

Although there will be some tie-ins between the novel/film and the tv series, the producers have confirmed that one needn't had to either read the book or have seen the original movie, to follow the story line, of the series.

The Man Who Fell to Earth film was released during the mid-1970s, when David Bowie had become an extremely famous musician, but also a disillusioned one.  While he had just completed his incredibly successful tour in support of his latest album, at the time, Diamond Dogs, Bowie said "I’ve rocked my roll. It’s a boring dead end. There will be no more rock 'n' roll records or tours from me. The last thing I want to be is some useless fucking rock singer."

Although the movie studio wanted Robert Redford to play the lead role, of Thomas Jerome Newton, the film's director wanted and convinced the studio that Bowie was a better fit. David Bowie said about his being cast, "Just being me as I was was perfectly adequate for the role. I wasn’t of this earth at that particular time."

Fortunately, for his music adoring fans, David Bowie's disdain for rock n' roll didn't last long, as he released Station to Station, in April 1976, saying at the time "No, oh no. I love rock & roll. Everything I've said about it in the past is all wrong.  I love it. I love it because it's so full of liars. I've never been in anything in my life where I could tell as many fibs and have so much fun with it."

Although, not a critical or commercial success, The Man Who Fell to Earth found a large cult following and was adored by many, including Bowie himself.  Shortly before his passing, he wrote both lyrics and music for Lazarus, a stage show based on the original movie, which was first performed just before his death in 2016.