This Yes tshirt spotlights the album cover artwork from Tales from Topographic Oceans.

Released on December 7, 1973, Tales from Topographic Oceans was Yes' sixth studio album and was a double album based on Yes singer, Jon Anderson's, interpretation of a footnote in Paramahansa Yogananda's Autobiography of a Yogi. While guitarist Steve Howe was both impressed with composing an album based on this theme and became a co-writer on it, keyboardist Rick Wakeman was not so enthralled by the idea and left Yes, to pursue a solo career, after the band toured to promote Tales from Topographic Oceans. While the album was a commercial success, reaching Gold status in both the US and the UK, it received mixed reviews critically and became described as a symbol for progressive rock excess.

Check out all of our Yes rock band tees here. 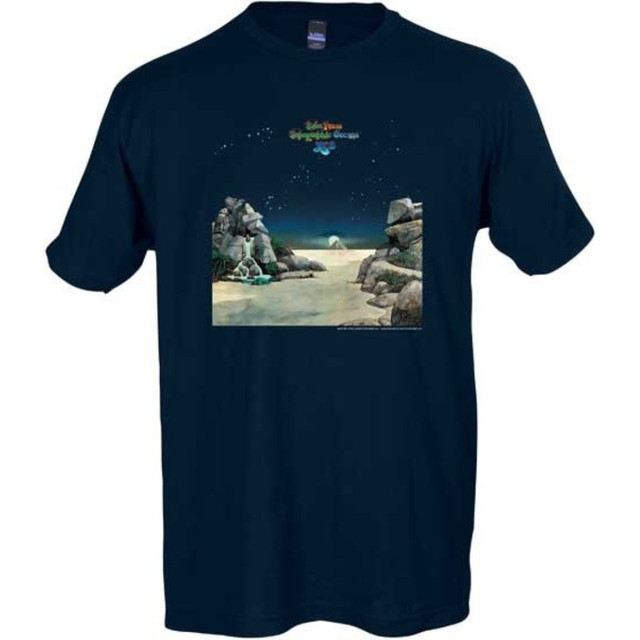 This New Order tshirt features the artwork from the original release of Movement, New Order's debut album . Released on November 13, 1981, following the band's name change to New Order from Joy...

Our vintage Pink Floyd concert tshirt is from the band's 1975 Wish You Were Here Tour. Also known as the North American Tour, this set of shows was performed to promote Pink Floyd's soon to be...

This Woodstock tshirt spotlights the artwork from the promotional posters used to advertise the original 3 day music concert festival, in 1969. Held on a farm, in Bethel, New York, between August...

This vintage Pink Floyd concert tshirt is from the classic progressive rock band's 1972 Dark Side of the Moon North American Tour. Performed to promote the release of the album, The Dark Side of the...