Released on September 11, 1990, Cherry Pie was the second studio album for Warrant and the classic glam rock band's most successful release, peaking at number 7 on the Billboard 200. The album's title track, Cherry Pie, was written in 15 minutes by Warrant's lead singer, Jani Lane, after the album had been completed, due to pressure by the Sony Music Entertainment president to make the album more marketable. The Cherry Pie single reached number 10 on the Billboard Hot 100 and is considered a rock anthem, listed as the 56th greatest hard rock song of all time, by VH-1. The guitar solo featured in the song is performed by Poison's C.C. DeVille.

This Warrant Cherry Pie men's unisex fashion tee is made from 100% black cotton. The front of the shirt highlights the artwork seen on the front cover of Cherry Pie, while the back of the shirt lists the song titles, in the order they appear on the Cherry Pie album.

CLICK HERE to choose your size
Poison
Poison - Talk Dirty To Me Song Single Album Cover | Men's Unisex Gray Vintage T-shirt
$31.00
This Poison Talk Dirty to Me tshirt spotlights the album cover artwork from the song single. Released on February 18, 1987, Talk Dirty to Me was the second single from Poison's debut album, Look... 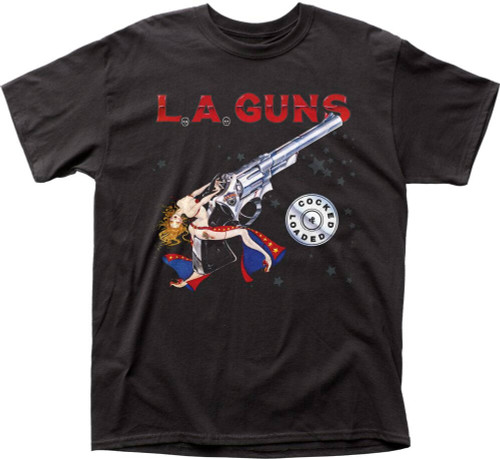 CLICK HERE to choose your size
L.A. Guns
LA Guns Album Cover T-shirt - Cocked & Loaded Men's Black
$21.50
This Item is Discontinued and No Longer Available - size Extra Large is the only size we have in stock. Our L.A. Guns tshirt features the album cover artwork from Cocked & Loaded, the second...