Our vintage The Clash tshirt, by Chaser, spotlights the London Calling album cover artwork. Released in 1979, in the United Kingdom, and in the US, in 1980, London Calling is the third studio album, by The Clash, and ble…

Released in 1979, in the United Kingdom, and in the US, in 1980, London Calling is the third studio album, by The Clash, and blended punk with new wave, ska, pop, jazz and reggae to create a juggernaut of an album that touched on controversial subjects, lyrically, including unemployment, racism and drug abuse. London Calling has gone Platinum with over 1 million copies sold and is considered one of the greatest albums, of all time.

This Clash London Calling tee, by Chaser, features the photograph of Clash bassist, Paul Simonon, smashing his bass guitar, as seen on the front cover of the London Calling album. The shirt is made from a white soft 50% polyester/38% cotton/ 12% rayon tri-blend, and the graphics are washed out, for an authentic vintage look, feel and fit, with a modern contemporary edge.

See our other vintage fashion The Clash shirts here. 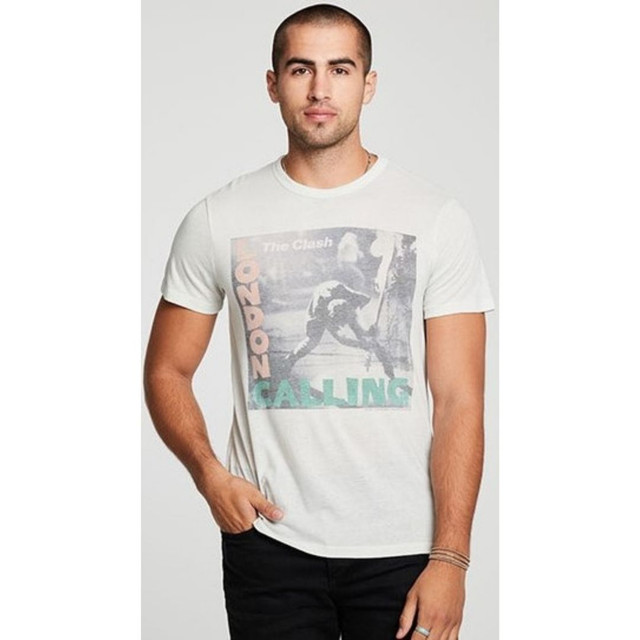 Our women's David Bowie tshirt is by Chaser and spotlights the album cover, from the Starman song single. Released as the lead single from David Bowie's legendary album, Ziggy Stardust and the...

This men's The Police vintage concert tshirt is by Chaser and is from the classic rock band's 1982 Ghost in the Machine North American Tour. These concerts were performed to promote The Ghost in the...

This Motley Crue vintage concert tshirt is by Chaser and is from the classic hard rock band's North American 1984 Tour. This set of shows was performed to promote Motley Crue's second album, Shout at...

Our Bob Dylan vintage fashion tshirt is by Chaser and spotlights both the album title and the 1965 release year, of one of the legendary singer-songwriter's best known albums, Highway 61 Revisited...

This David Bowie vintage fashion tshirt spotlights a classic photograph of The Great White Duke from his glam rock Ziggy Stardust hey days of the early-mid 1970s. Capturing an image of David Bowie,...

This Cheap Trick vintage fashion concert tour tshirt is from the band's 1979 Dream Police Tour, which was performed to promote the Dream Police album, Cheap Trick's most recent release, at the time...

Our AC/DC vintage fashion concert tshirt is by Dirty Cotton Scoundrels and is from the classic hard rock band's September 10, 1979 Long Beach Arena show. This show was part of AC/DC's Highway to Hell...