Our vintage never worn Swatch watch is model GK309 and is titled Empire State. Spotlighting the theme of the legendary Empire State Building, the Swatch GK309 Empire State watch was released, in 1999, and highlights the…

This Swatch GK309 Empire State vintage unisex watch comes in the original limited edition special packaging Swatch created to promote this watch. The top of the packaging features a cut out of the Empire State Building that stands upright when opened, along with various photographs of the New York City skyline visible from Empire State Building's top floor, plus some basic history of the building, on the back, all which allows for the watch to be a display piece, if not chosen to be worn. This watch also comes with both its original Swatch watch instruction manual, highlighting the GK309 model number, along with the pamphlet Swatch included, with a more detailed history of the Empire State Building and the lighting schedule, of 1999. The watch itself is resting inside its original Swatch watch case. 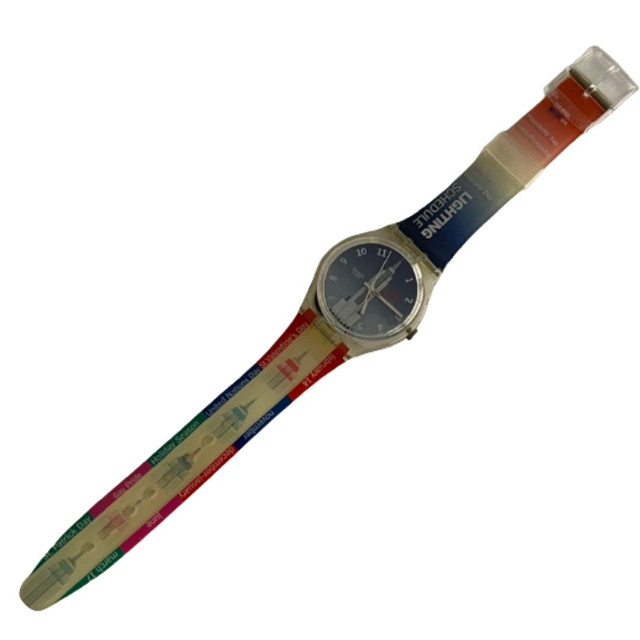 This never worn vintage Swatch watch is model GN162 and is titled Romeo and Juliet. Released to promote Valentine's Day, in 1996, the theme of the GN162 Romeo and Juliet watch is the classic William...

This vintage never worn Swatch watch is model GZ164Pack1 and is title Genetic Code. Released in 2000 as the official watch for the Swatch Club that year, the GZ164Pack1 Genetic Code watch has a...

This never worn vintage Swatch watch is model GN162 and is titled Romeo and Juliet. Released to promote Valentine's Day, in 1996, the theme of the GN162 Romeo and Juliet watch is the classic William...

This women's vintage Run-DMC concert tshirt is by Recycled Karma and is from the legendary hip-hop group's Raising Hell Tour. The Raising Hell Tour was performed, in 1986, to support Run-DMC's album,...

This never worn vintage Swatch watch is model number SLZ104Pack and is titled Swatch Zapping. Released as part of Swatch's 1996 Spring Summer collection, the SLZ104PACK Swatch Zapping watch is a...

Our women's Blondie long sleeve tshirt, by Chaser, spotlights a classic photograph of the legendary rock band framed by both a glossy version of the Blondie logo and the Fade Away and Radiate song...

Our vintage Alice Cooper tshirt spotlights the promotional poster for the classic shock rocker's April 8, 1979 performance on the Mad House Rocks show. Made from 100% black cotton, this men's unisex...

Our women's vintage Joan Jett sweatshirt, by Recycled Karma, spotlights The Runaways Joan Jett logo. The band that launched Joan Jett's career, The Runaways were an all-female band, during the...