These shows were part of Led Zeppelin's final concert tour and were performed to promote their album, Presence. Although the tour was considered a major financial success for the band, it was plagued with problems, including Robert Plant's laryngitis, Jimmy Page's drug addiction, backstage fights and the death of Robert Plant's son which caused shows to be cancelled and the tour to end early.

This Led Zeppelin United States of America Tour 1977 Recycled Karma women's vintage fashion concert tee features the famous image of Icarus used as the artwork to promote the tour and is made from 100% white cotton with a fitted silhouette, ribbed crewneck and distressed hems for an authentic vintage and edgy rocker chic vibe.

See all of our Led Zeppelin vintage fashion and concert shirts here. 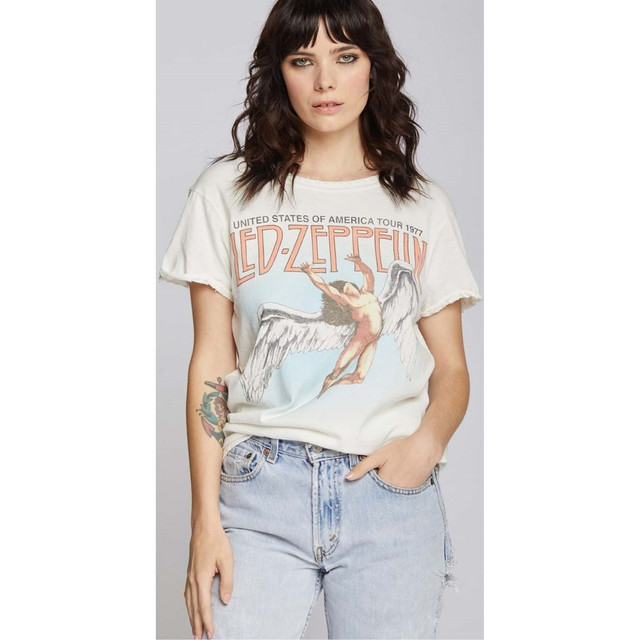 This KISS women's vintage fashion tshirt is by Recycled Karma and spotlights the album cover and the 1976 release year, of Destroyer, the classic rock band's 4th studio release. The first KISS album...

Our vintage Led Zeppelin concert fashion tshirt is from the classic rock band's June 22, 1977 show, at the Forum, in Inglewood, California, a suburb of Los Angeles. Part of Led Zeppelin's 1977 United...

This women's vintage Elton John fashion tshirt is by Chaser. One of the most successful artists in rock music, Elton John has sold over 300 million copies of his albums and had nine number 1 hits, in...

This Def Leppard vintage concert fashion tshirt is by Recycled Karma and is from the band's September 1983 concerts performed in Inglewood, California, a suburb of Los Angeles. These shows were part...