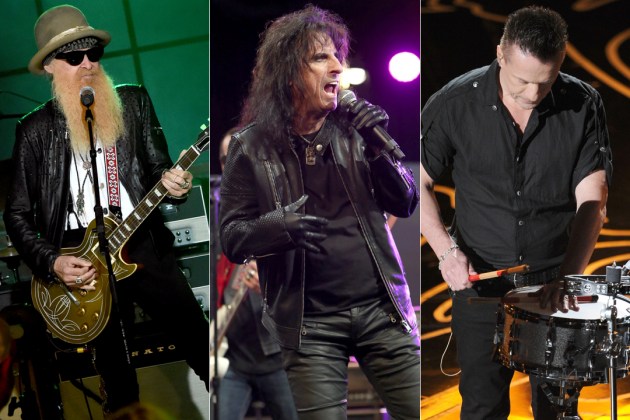 This July, Alice Cooper will release, Paranormal, his first solo album since 2011's Welcome 2 My Nightmare, and the 27th studio release of his career. Produced by Bob Ezrin, Paranormal will feature performances by ZZ Top's Billy Gibbons and U2's Larry Mullen. Bob is the one who suggested Larry Mullen for the album, and Alice loved the idea saying "that’s a great idea, it’ll change things up so much, just on the basic tracks.”  Alice went on to say that Larry wanted to see the lyrics of the songs he was asked to perform on before committing. According to Alice, Larry said "I play to the lyrics, I don’t play to the bass,” to which Cooper replied “And I said that is so cool, just the idea that you’re interpreting the lyrics on the drums. It totally makes the album another album.”

ZZ Top's Billy Gibbons will appear on the song, "I've Fallen in Love and I Can't Get Up."  According to Alice, he felt "If BIlly Gibbons doesn’t play on this, we shouldn’t put this one out.  Because it is just so him. And [when] Alice got the recording, ‘I got the flu, but, man, this song makes me feel better.’ He just killed it.”

Alice is telling fans not to expect a scary record here, but it's still going to be appealing to Alice Cooper fans.. It's called Paranormal, because, according to Alice, "paranormal meaning other than normal. This is not a normal Alice record. Bob and I decided, no theme this time, we’re gonna make a record of things that just get us off, things that we like. And it might go in a lot of directions.”