Made from 100% super soft gray cotton with an oversized fit, relaxed crew neckline and distressed edges, our Genesis Invisible Touch Tour Recycled Karma tee spotlights the famous artwork from the Invisible Touch album cover, on the front. The back shows a map of the United States, along with the hand from the album's cover, depicting the locations where the Invisible Touch North America Tour was performed. The list of cities where the concerts were held is underneath the map. The graphics and materials on this tee are extremely distressed for a fashionable, edgy and authentic vintage look.

See all of our vintage band and lifestyle shirts by Recycled Karma here.

See all of our vintage Genesis fashion tees here. 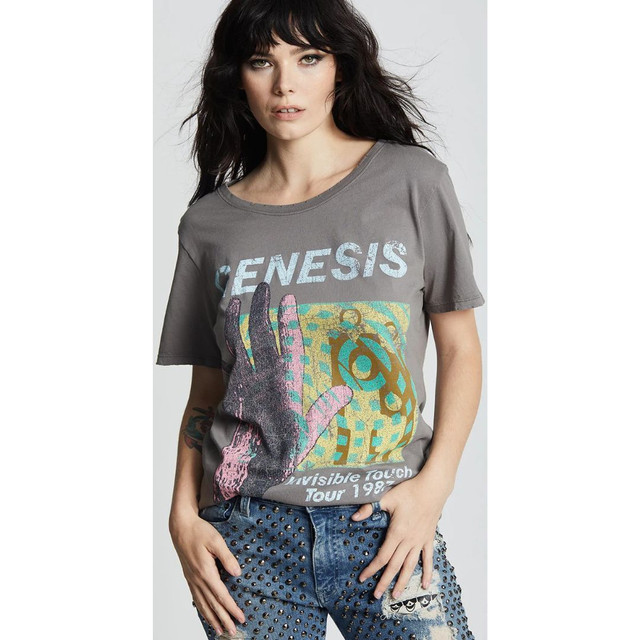 Our KISS vintage fashion concert hoodie sweatshirt, by Recycled Karma, is from the Japanese shows, of KISS' 1987-1988 Crazy Nights World Tour, which was performed to promote the Crazy Nights album,...

Our women's vintage style Genesis concert tshirt is by Recycled Karma and is from the classic rock band's We Can't Dance North American Tour. The We Can't Dance Tour was performed from May-July,...

This Sex Pistols vintage tshirt, by Recycled Karma, spotlights the legendary punk rock band's song, God Save the Queen. The second single, from the Sex Pistols debut and only album, Never Mind the...

Our vintage inspired Joan Jett and The Blackhearts sweatshirt is by Recycled Karma and spotlights a classic image of Joan Jett with her guitar doing what she does best: wailing into a microphone,...

This men's Grateful Dead tshirt, by Chaser Brand, is from the legendary jam band's June 1, 1991 concert at the Los Angeles Memorial Coliseum, in Los Angeles, California. Performed following the...

Our Woodstock women's tshirt, by Recycled Karma, spotlights both the classic logo of the dove resting on the neck of a guitar and the promotional slogan of Peace Love and Music, for the original 1969...

This Daydreamer LA vintage style thermal tshirt spotlights a classic image of Willie Nelson. A pioneer of outlaw country music, Willie Nelson is one of the most well known and respected...

Our Rolling Stones vintage concert tshirt, by Daydreamer LA, is from the band's 1978 World Wide Tour. Performed to support the Rolling Stones' latest album, at the time, Some Girls, the World Wide...

Wham! Wake Me Up Before You Go-Go Women's Vintage T-shirt by Recycled Karma

Our Wham! Recycled Karma tshirt spotlights both the logo for the legendary George Michael and Andrew Ridgley 1980s pop music duo and the song title to Wake Me Up Before You Go-Go, their first number...

This CBGB & Omfug men's unisex fashion tshirt features the logo from the famous rock club. CBGB & Omfug, known among rock fans as CBGBs, is one of the most famous and respected music clubs in...

This women's The Doors vintage inspired tshirt, by Daydreamer LA, spotlights a classic image of the legendary rock band, along with their logo and the title to one of their biggest hits, People are...