Our Genesis tshirt, by Chaser, spotlights the photograph of the band that was included, on the inner album sleeve of Abacab. Both recorded and released in 1981, Abacab marked a musical departure for Genesis as they deci…

Our Genesis tshirt, by Chaser, spotlights the photograph of the band that was included, on the inner album sleeve of Abacab.

Both recorded and released in 1981, Abacab marked a musical departure for Genesis as they decided to focus on pop-friendly radio singles rather than the progressive rock sound they had become known for. With the hits Abacab, No Reply at All and Man on the Corner, Abacab was both a critical and commercial success breaking into the Billboard 200 Top 10.

Made from 100% black cotton, this men's Genesis tee, by Chaser, features the photograph of the band against the color patterns, from the Abacab album cover, and the band's logo. The graphics are washed out giving this shirt a fashionably authentic vintage look.

See all of our band and music lifestyle shirts by Chaser here.

See all of our vintage inspired Genesis fashion shirts here. 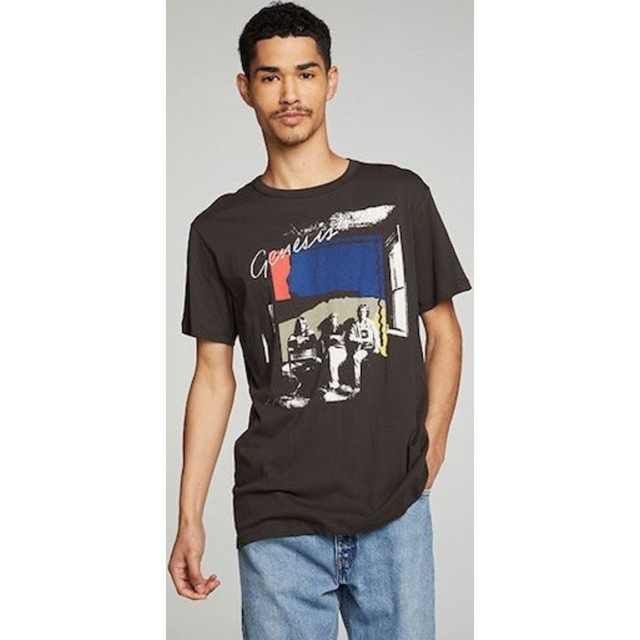 Our men's music lifestyle fashion tshirt is by Chaser and spotlights Vintage Vinyl, in a retro inspired gold cursive style font. This Chaser tee is made from 100% black cotton. See our other men's...

Our women's Blondie long sleeve tshirt, by Chaser, spotlights a classic photograph of the legendary rock band framed by both a glossy version of the Blondie logo and the Fade Away and Radiate song...

Our Aerosmith tshirt, by Chaser, spotlights a classic image of the legendary rock band, along with their logo and title to one of their biggest hits, Dream On. Written by lead singer Steven Tyler...

This Stevie Ray Vaughn and Double Trouble tshirt is from the band's Live Alive 1986 Tour. Consisting of 5 legs, performed from November 1986 - December 1988, the Live Alive Tour was performed to...

Dress up and rock your outfit with this Walker jacket by Saltwater Luxe. Perfect for adding some cold weather edge to your outfit, the Walker jacket features long sleeves and is designed and made,...

Our Aretha Franklin fashion tshirt spotlights a classic photograph of the legendary singer-songwriter. Globally referred to as the Queen of Soul, Aretha Franklin has sold over 75 million albums,...

This Sandrine Rose vintage style Grateful Dead concert tshirt is from the classic rock band's July 1989 show, at the former John F. Kennedy Stadium, in Philadelphia. Made in the USA from 100% white...

Our men's Elton John tshirt is by Chaser and features a classic image of the legendary singer-songwriter performing underneath an illuminated version of the Crocodile Rock song title. Released in...

This David Bowie fashion tshirt is by Chaser and spotlights a classic and psychedelic inspired image of David Bowie, with the title to one of the classic rock singer-songwriter greatest known hit...