Made from 100% white cotton, this white long sleeve tee spotlights a classic drawn image, of the legendary rock band, framed by the Creedence Clearwater Revival band name and In Concert. The materials and graphics feature washed out effects, by Recycled Karma, to create a true vintage edgy vibe.

Together for only 4 years, Creedence Clearwater Revival, often affectionately referred to as simply Creedence or CCR, wrote and recorded some of the biggest hits in rock n' roll history, all of which continue to receive regular air play on classic rock radio stations, around the world. These songs include Have You Ever Seen the Rain, Looking Out my Backdoor, Bad Moon Arising, Born on the Bayou and Down on the Corner, among many others. Their greatest hits album, Chronicle The 20 Greatest Hits, was released in 1976 and remains on the Billboard 200 Album Chart, to this day, 500 weeks after it was released, with over 10 million copies sold. 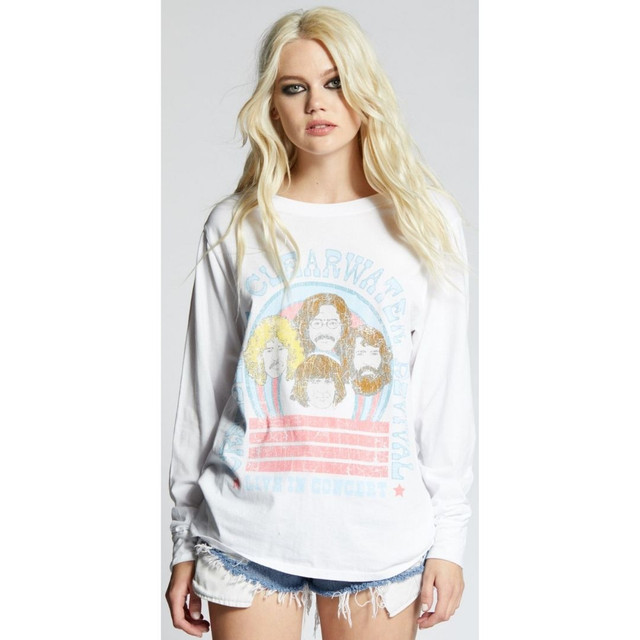 Our Creedence Clearwater Revival tshirt features the artwork from Chronicle, Vol. 1. Released in January 1976, by Fantasy Records, CCR's original record label, to coincide with the release of CCR's...

Our vintage Def Leppard fashion concert tshirt, by Recycled Karma, is from the classic rock band's June 1993 tour of Tokyo, Japan. The Tokyo, Japan shows were performed as part of the Asian leg, of...

Our AC/DC vintage fashion concert tshirt is by Dirty Cotton Scoundrels and is from the classic hard rock band's September 10, 1979 Long Beach Arena show. This show was part of AC/DC's Highway to Hell...

BACK IN STOCK!! Our women's vintage Led Zeppelin concert sweatshirt is by Recycled Karma and is from the classic rock band's February 7, 1975 show, at Madison Square Garden, in New York City. This...

This women's Pink Floyd vintage fashion concert thermal tshirt is by Chaser and is from the classic rock band's 1973 United States Dark Side of the Moon Tour. These concerts were performed to promote...

Our women's AC/DC fashion tshirt features the Back in Black album cover artwork. Released in July 1980, Back in Black was AC/DC's first album with current lead singer Brian Johnson. Featuring the hit...

Our vintage Def Leppard fashion concert tshirt, by Recycled Karma, is from the classic rock band's June 1993 tour of Tokyo, Japan. The Tokyo, Japan shows were performed as part of the Asian leg, of...