Released on March 23, 1983, Eliminator is both ZZ Top's eighth studio album and their most successful release, reaching Diamond status, with over 10 million copies sold. Eliminator saw ZZ Top venturing into a new musical direction through the utilization of synthesizers, drum machines and sequencers, as they had become inspired by the growing popularity of New Wave, at the time. In addition, the band produced music videos in a way they hadn't, in the past, to help promote the album. Through heavy exposure and air play on radio and MTV, ZZ Top's singles Legs, Gimme All Your Lovin, Got Me Under Pressure, Sharp Dressed Man and TV Dinners were able to introduce the band, along with their modified 1930s era Ford coupe, to a whole new audience. Eliminator is ranked at number 398 on Rolling Stone's 500 Greatest Albums of All Time and number 39 in the 100 Greatest Albums of the 1980s.

This women's black racerback tee is made from a 60%/40% cotton-polyester blend and features the artwork of the Ford coupe, the classic ZZ Top logo and Eliminator name, exactly as they appeared on the front cover of the album.

Check out our other ZZ Top men's and women's shirts here. 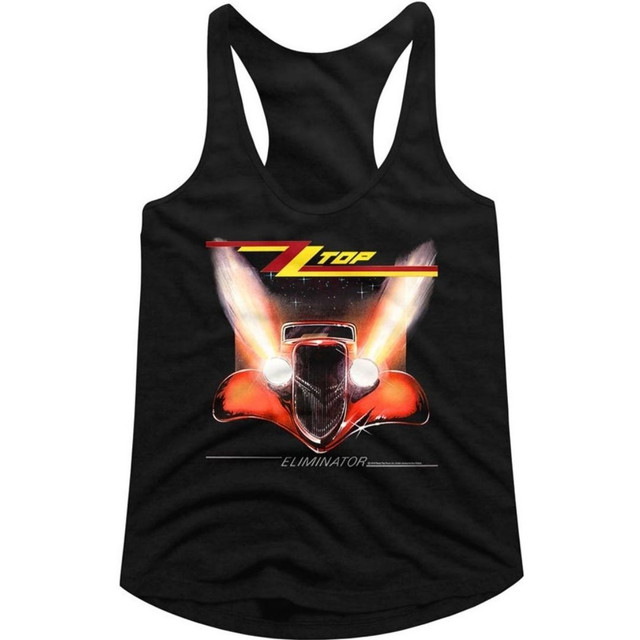 This ZZ Top concert fashion tshirt is from the classic blues rock band's 1983-1984 Eliminator Tour. Beginning on May 12, 1983, and featuring Quiet Riot, Jon Bon Jovi and Sammy Hagar as the various...

This vintage ZZ Top fashion concert tshirt is from the classic blues rock band's 1990 United States Tour. Performed as part of the first leg of ZZ Top's Recycler Tour that began in October 1990 and...

THIS ITEM HAS BEEN DISCONTINUED - ONLY SIZE LARGE IN STOCK.  Our women's vintage sleeveless Journey concert fashion tshirt is from the classic rock band's 1986 Detroit, Michigan concerts. These...