This men's The Police vintage concert tshirt is by Chaser and is from the classic rock band's 1982 Ghost in the Machine North American Tour.

These concerts were performed to promote The Ghost in the Machine album, The Police's 4th studio release, which featured the singles Spirits in the Material World, Invisible Sun, Every Little Thing She Does is Magic, and Secret Journey, most of which continue to receive regular airplay on classic rock radio.

Made from a 60% cotton/40% recycled polyester blend, our Police Ghost in the Machine 1982 North American Tour vintage fashion concert tee, by Chaser, spotlights The Police logo, the digitally drawn band members, from the front cover of the Ghost in the Machine album, plus photographs of the band, on the front. The back of the shirt highlights a dark highway with mileage signs displaying the dates and cities of The Police's 1982 North American Tour.

See all of our vintage fashion shirts, from The Police, here.

See all of our men's vintage band and music lifestyle fashion tees, by Chaser, here. 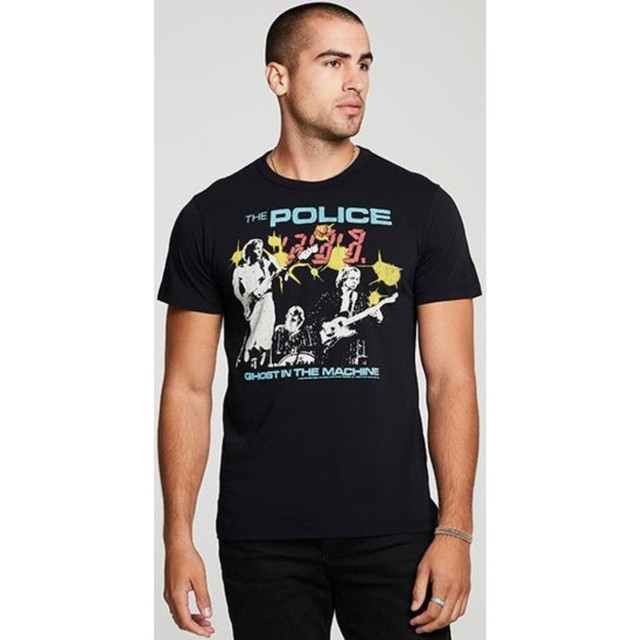 Our vintage concert baseball jersey is from The Police's 1981-1982 Ghost in the Machine Tour. These shows were performed to promote The Police's latest album at the time, also titled Ghost in the...

This women's vintage fashion The Police concert tshirt is by Chaser and is from the classic alternative rock band's 1983 North American Tour. These shows were performed to promote The Police's latest...

Our women's The Police vintage fashion concert tshirt, by Chaser, is from the classic alternative rock band's 1982 Ghost in the Machine North American Tour. These shows were performed to promote The...

Our Bob Dylan vintage fashion tshirt is by Chaser and spotlights both the album title and the 1965 release year, of one of the legendary singer-songwriter's best known albums, Highway 61 Revisited...

Our vintage The Clash tshirt, by Chaser, spotlights the London Calling album cover artwork. Released in 1979, in the United Kingdom, and in the US, in 1980, London Calling is the third studio album,...

This Motley Crue vintage concert tshirt is by Chaser and is from the classic hard rock band's North American 1984 Tour. This set of shows was performed to promote Motley Crue's second album, Shout at...

This KISS women's vintage fashion tshirt is by Recycled Karma and spotlights the album cover and the 1976 release year, of Destroyer, the classic rock band's 4th studio release. The first KISS album...

Our classic The Police concert tshirt is from the band's 1980 Japan tour. These shows were performed to promote The Police's second studio album, Regatta de Blanc, which was originally released in...