The Paradise Theatre tour was performed to promote the Paradise Theatre album, Styx's 10th studio album, and their latest release, at the time. Paradise Theatre was a conceptual album which documented a fictional account of Chicago's Paradise Theatre, from its opening, to its closing and abandonment which Styx singer, Dennis De Young, confirmed was a metaphor for the changing attitudes, of the late 1970s-early 1980s. Released in January 1981. Paradise Theatre was Styx's only album to reach number 1 and, subsequently, Styx's last album, to go multi-Platinum. Four singles charted off of Paradise Theatre, and two of them broke into the Top 10 of Billboard's Hot 100: The Best of Times and Too Much Time on My Hands.

Click here to see all of our other Styx products.

CLICK HERE to choose your size
Styx
Styx Concert T-shirt - Styx US Tour 1977. Men's Black Vintage Shirt
$21.50
Our men's Styx concert tshirt is from the classic rock band's 1977 tour of the USA. These sets of shows were performed to promote Styx's seventh studio album, The Grand Illusion, which was released... 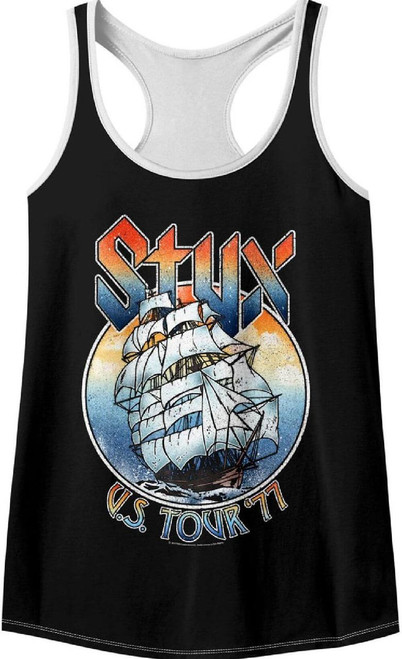