Our Poison vintage concert tshirt is from the hard rock band's 1986-1987 Look What the Cat Dragged In Tour.

These concerts were performed to promote Poison's debut studio album, also titled Look What the Cat Dragged In. Released on August 2, 1986, the Look What the Cat Dragged In album peaked at number 3 on the US Billboard 200 and is one of Poison's most commercially successful releases. The album featured some of the band's best known hit songs, some of which continue to receive regular radio station air play, including Talk Dirty to Me, I Want Action, I Won't Forget You and Cry Tough.

This Poison Look What the Cat Dragged In Tour 86/87 men's tee is made from 100% blue cotton and spotlights a classic photograph of the Poison band members with their names and their roles in the band, printed below the picture. The graphics on this shirt have distressed effects for a vintage look. 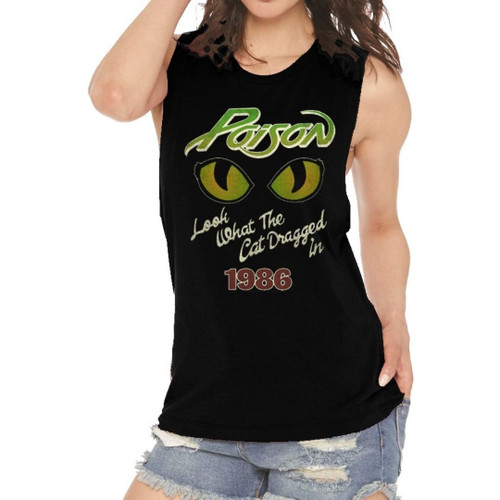