Our men's Journey concert t-shirt is from the classic rock band's 1979 Tour, which was performed to support Journey's most recent album, at the time, Evolution.

Released on March 23, 1979, Evolution was Journey's fifth studio album and featured the hit Lovin' Touchin' Squeezin, which helped Evolution become the band's most successful release, up to that point. The Evolution album, and its subsequent concert tour, were Journey's first with Steve Smith, their current drummer.

Made from a 50%/50% cotton-polyester blend, this charcoal gray tee prominently displays the album artwork, from the front cover of Evolution, as well as the Journey name and '79 Tour. The graphics have washed out distressed effects for an authentic vintage look. 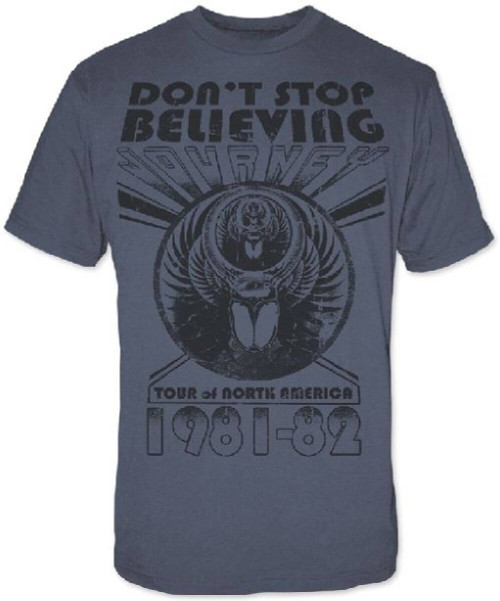 CLICK HERE to choose your size
Journey
Journey Vintage Concert T-Shirt - Don't Stop Believing 1981-1982 North America Tour | Men's Grey
$22.00
This Item Has Been Discontinued - The Sizes Displayed are the Only Ones We Have Available. This Journey vintage tshirt is from the band's 1981 - 1982 concert tour of North America performed to...