While Nirvana's Nevermind catapulted the Seattle Grunge movement, from, essentially, unknown obscurity to mainstream popularity, Alice in Chains' Facelift, was released over a year before Nevermind, and helped set the stage, for the onslaught of Grunge and alternative rock releases to follow.  Reaching store shelves on August 21, 1990, Facelift featured the Alice in Chains singles Man In the Box, We Die Young, Bleed the Freak and Sea of Sorrow.  Although the album was not an immediate sales success,  MTV started playing the video, for Man In the Box, regularly, and the album reached gold status, the first Grunge album to do so, in September 1991, just over a year, after it was released.  Peaking at number 42, in the Billboard 200, Facelift was nominated for a Grammy Award for Best Hard Rock Performance with Vocal, and the song, Man In the Box, was nominated for Grammy Award for Best Hard Rock Performance, in 1992.  Facelift was the first Grunge album to reach the top 50, of the Billboard 200 and be certified Gold.

Made from 100% black cotton, our Alice in Chains Facelft tee features the distorted face, of former Alice in Chains bassist, Mike Starr, that was seen on the front cover the legendary album.

Click here to see all of our other Alice in Chains products. 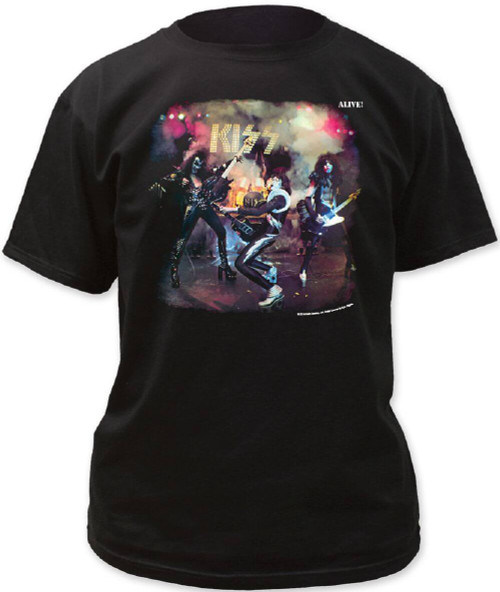 CLICK HERE to choose your size
Alice In Chains
Alice in Chains Vintage T-shirt - Dirt Album Cover Artwork. Men's Black Shirt
$21.50
Our vintage Alice in Chains men's tshirt spotlights the Dirt album cover artwork. Released on September 29, 1992, Dirt was the second studio album, by Alice in Chains, but their last, with the...

CLICK HERE to choose your size
Alice In Chains
Alice in Chains Vintage T-shirt - Jar of Flies Album Cover Artwork | Men's Shirt
$21.50
This Alice in Chains men's vintage tshirt features the album cover artwork, from Jar of Flies. Released by Columbia Records, on January 25, 1994, Jar of Flies was the third studio EP by the...

CLICK HERE to choose your size
AC/DC
ACDC T-shirt - Highway to Hell Album Cover Artwork. Men's Black Shirt.
$22.00
This AC/DC men's black tshirt features the album cover artwork from the band's 1979 release, Highway to Hell. This tee is made from 100% cotton. Highway to Hell is the last album to feature lead...