This Doors t-shirt spotlights a classic photograph of Jim Morrison, the band's legendary lead singer, collapsed while performing on stage.

Considered one of the most mysterious figures in contemporary popular culture, Jim Morrison has become, to many, the defining figure of the 1960s youth counter culture movement. Known for his distinctive voice, poetic lyrical style, along with his rebellious and reckless lifestyle, Jim Morrison remains one of the most famous and best loved characters, in the history of rock n roll. Furthermore, he is highly ranked as one of rock's best singers and lyricists.

Made from 100% white fitted cotton, our men's tee spotlights a black and white image of a collapsed Morrison, on stage, in front of an audience, underneath an over sized version of The Doors' famous logo. See all of our Doors gear here. 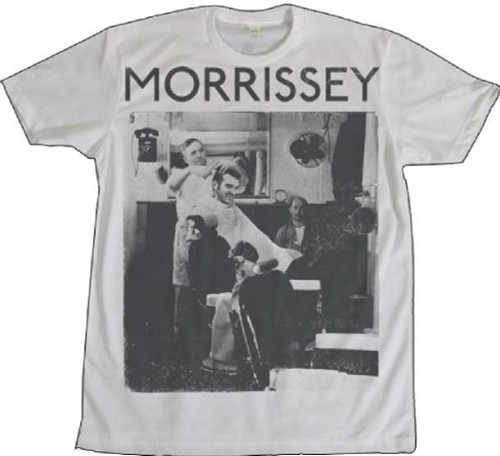 CLICK HERE to choose your size
Morrissey
Morrissey Fashion T-shirt - Barber Photograph. Men's Unisex White Shirt
$25.00
This Morrissey men's unisex fashion tshirt spotlights a classic black and white photograph of the legendary singer, getting his haircut, at a barber shop. Rising to prominence, during the mid-1980s,...