This Smashing Pumpkins tshirt spotlights the Smashing Pumpkins name as it appeared on Gish, the alternative rock band's debut studio album. Originally released by Caroline Records in 1991, Gish peaked at 195 on the Billboard 200 but has since gone onto reach Platinum status, with over 1 million copies of the album sold. Smashing Pumpkins' lead singer, Billy Corgan, co-produced Gish with Butch Vig, who would go onto produce Nirvana's juggernaut, Nevermind, and then drum for and produce another well known 1990s alternative rock band, Garbage. Billy Corgan has described Gish as a very spiritual album, and the single, Rhinoceros, continues to receive airplay on alternative rock radio. 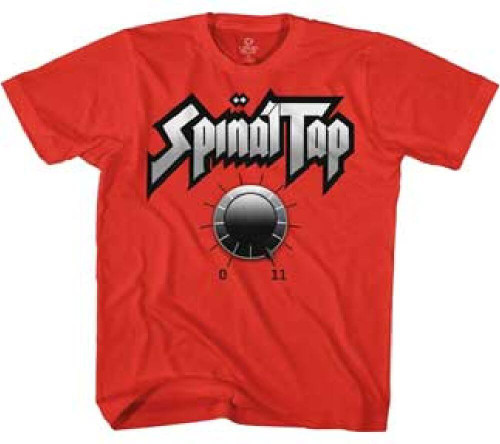 CLICK HERE to choose your size
Spinal Tap
Spinal Tap T-shirt - Amplifier Knob with Eleven | Men's Red Shirt
$21.50
Our Spinal Tap tshirt spotlights the famous knob to Nigel Tufnel's amplifier that, unlike every other amplifier which only went to 10, this one goes to 11. Made famous in the movie, This is Spinal...